The distinction between “Treatment effect” and “Effect size” lies not in the index but rather in the substance of the meta-analysis.  When the meta-analysis looks at the relationship between two variables or the difference between two groups, its index can be called an “Effect size”.  When the relationship or the grouping is based on a deliberate intervention, its index can also be called a “Treatment effect”.

What characterizes an effect size (and treatment effect) is that it looks at effects. Other meta-analyses do not look at effects but rather attempt to estimate the event rate or mean in one group at one time-point.  For example, “What is the risk of Lyme disease in Wabash” or “What is the mean SAT score for all students in Utah”.  These kinds of indices are called simply “Point estimates”, a generic category that includes the category Effect size, which in turn includes Treatment effects.

Fortunately, these distinctions are largely unimportant.  In any meta-analysis, and in CMA, the mechanisms for computing effects, running analyses, and presenting data are largely the same for all these kinds of data.

Why use CMA software?

Comprehensive Meta-Analysis is a powerful computer program for meta-analysis. The program combines ease of use with a wide array of computational options and sophisticated graphics. 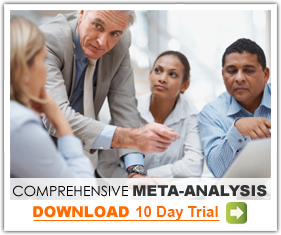 "Comprehensive meta-analysis (CMA) is essential software for the meta-analyst. Complex analyses can be conducted easily using this intuitive software. The support staff are always helpful and respond quickly when questions arise. I highly recommend CMA."

Erika A. Patall - Department of Educational Psychology - The University of Texas at Austin, Austin, TX